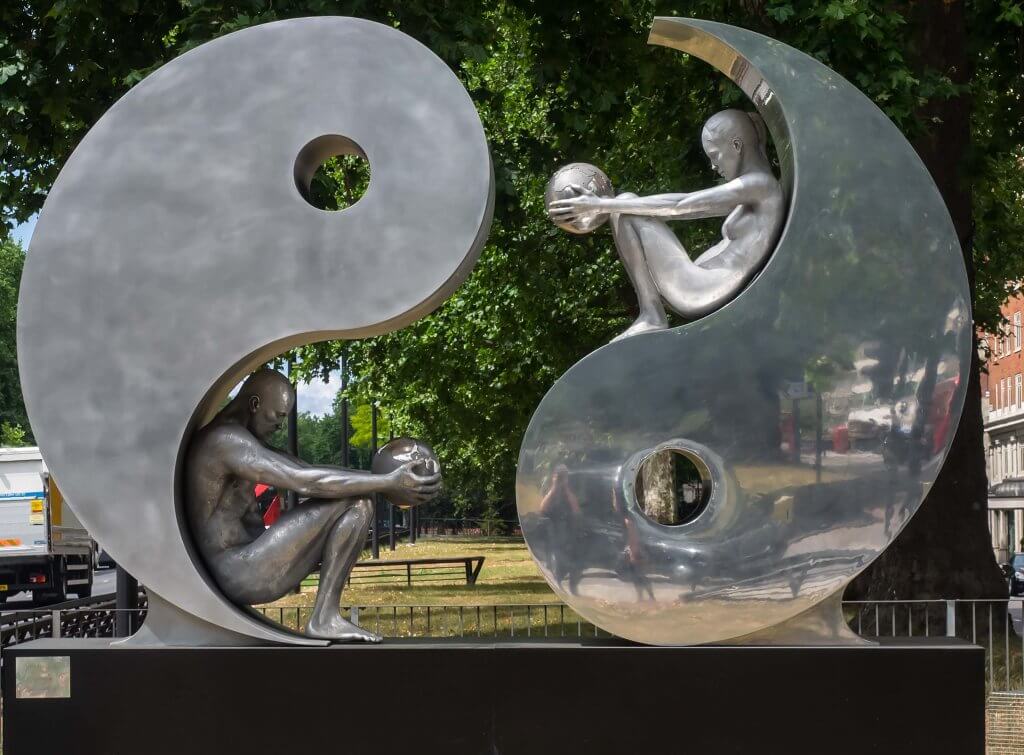 What is Masculine and Feminine Energy?

As someone begins to explore the attraction dynamics of romantic relationships, they’ll often find themselves asking, “What is Masculine and Feminine Energy?” They ask this question because they’ve heard these apparent buzz words floating around in conversations about love, sex, and attraction. Yes, you might hear them more frequently now, and they’re anything but buzz words. These two specific and potent words carry a depth of meaning that most don’t begin to comprehend. Worse yet, these two words that play such a significant role in not just the chemistry and passion in conscious relationships, but also the entire expression of humanity, are often quite misunderstood and therefore judged for something they are not.

The definitions of these two words have also evolved as our understanding of gender and sex has evolved. To be clear the words masculine and feminine are not synonymous with sex nor gender. Masculine and feminine energies interplay with, and sometimes but not always, correlate with, gender or sex, but they are most certainly not the same thing. We must take note that we are speaking about energies here and not about tangible forms or anatomy.

We define masculine and feminine energies qualitatively, or better yet, experientially. As you deepen your understanding of these two words you’ll find that you’ll be able to feel them quite quickly and quite distinctly.

Before we dive into describing the difference between masculine and feminine energy, it will serve to note that these two words of Latin origin parallel the meaning of the words yang and yin, respectively, which have Chinese origins in the third century BCE or before.

Considering the definitions of yin and yang, they are considered universal opposite and complementary energies or forces. These opposing, yet joint energies, together actually make up the entirety of existence. One cannot exist without the other. As one decreases, the other increases. Together they create harmony and balance.

What is the Difference between Masculine and Feminine Energy?

Masculine or yang energy is the active, focused, driven, penetrating energy in the world. Yin is the passive, boundless, flowing, receptive energy. We’ll go deeper into more qualities of each energy in a moment, and for now, notice how through this initial description, you can already see the contrasting opposite natures of the two words.

The active generative nature of masculine energy produces results while the passive creative energy of the feminine attracts matter and experiences. The Law of Attraction has its roots in feminine energy. Feminine energy magnetizes or draws things and experiences to us. It is the effortless energy, while masculine energy, is the effortful, make-things-happen, get-shit-done energy. Masculine energy sucks it up, so to speak, and drives through the obstacles. Driving to a goal can be completely conscious, kind, and respectful, and that is also a time when the unconscious, or shadow side, of the masculine can show up. But as you’ll see in a moment, masculine energy is certainly not all shadow. To be clear, in and of itself, masculinity is not toxic.

You cannot plan art. Art, in its greatest expression, comes from pure inspiration. It flows through the artist. You simply can not be in your masculine energy and create true art. Comparatively, you cannot be in your feminine energy and perform brain surgery. Notice that these two activities have nothing to do with the gender or sex of the artist or surgeon, but the success of their endeavors depends highly on the energy they bring to that activity.

All of that brings us directly to a sexual aspect of these two energies.

For feminine beings who love masculine beings, they are most definitely aware of the single-focused nature of the masculine. This is the masculine quality that has him not hear you when you are talking to him, because he’s so focused on the task at hand. While it can drive her crazy when his focus is on the TV, a book, or the computer, she can revel in the single-focused deep presence of the masculine when its eyes are fully riveted, penetrating her soul, and driving her heartrate up as she feels like she can barely move in his gaze.

Similarly, I took a phone call from a potential client years ago who was describing what he desired in a relationship. He shared that he desired a woman who was completely sexually uninhibited. He wanted her wild and fully expressed in her sexuality. He continued a few minutes later saying, but I don’t want a woman who is emotional. Here’s the challenge, gentlemen, or better said, masculine beings. If you are attracted to a woman who is feminine, or any predominantly feminine being, you have to embrace the fullness of femininity. You can’t have one part of feminine energy like wild and free and not also embrace the emotional, unrestrained and chaotic side.

Let’s look at a few more quick comparisons between masculine and feminine energy.

The masculine plans. The feminine goes with the flow.

The masculine has boundaries. It contains. The feminine by nature is boundless, infinite. It can not be contained.

When looking at a person, say watching someone walk across the room, you can feel masculine and feminine energy in your body. Watching a deeply feminine woman, for example, you’ll likely feel as if you can see an invisible light surrounding her, or in other words, you’ll see and feel, and likely be captivated by her radiance. It’s as if your attention is inexplicably drawn to her. In contrast, a fully embodied masculine being who walks across the room will give you a feeling of knowing, a knowing without knowing, that this person knows who he is, where he’s going and what he’s committed to, even though you may consciously know nothing of the sort. In this case, it’s as if his mere presence commands your attention.

What is a Mixture of Yin and Yang Energy?

While it is true that we each have a mixture of yang, masculine and yin, feminine energy within us, one of the ways our misunderstandings of these two energies wreaks havoc in love lives and sex lives occurs when these energies mix unconsciously and inauthentically. The problem in our romantic lives, and truly our whole lives, happens when they are not in harmony, when one is repressed or underused, while the other is over-amped or overused.

Many think the antidote is trying to balance masculine and feminine energy, but that only makes the problem worse. We want each energy to express authentically within us. For most people that means that one energy will be stronger or more predominant than the other. When we try to balance we actually neutralize the polarity, the attractive force, of the two energies, which in turn is why so many dating relationships and marriages end up in the friend zone.

In dating, for example, we’ll see this show up with a strong independent woman (who underneath is truly feminine at her core) walking around disappointed, asking, “Where are all the strong men?” She wants a man who embodies more masculine energy than she does. However, because of the out of balance mixture of masculine and feminine energies within her, she ends up frustrated, blaming the lack of polarity on men, when the true cause of her dating dilemmas arises from her own out-of-balance, and even unconsciously inauthentic, relationship with the masculine and feminine within herself.

In masculine beings, particularly, for example, a masculine man may tone down his own genuine masculinity so he’s never perceived as that guy, never coming close to what he imagines toxic masculinity to be. This man can experience himself as the nice guy who finishes last, who never seems to get the girl. These men will again often find themselves friend-zoned, with great female companions, but not a hotly passionate (and deeply in love) lover.

Too many today think in terms of masculine vs feminine energy, instead of focusing on their complementary and intertwined infinite nature. This thinking immediately puts the two energies at odds with each other. It perpetuates the old battle of the sexes.

Now, there is no question that masculine and feminine energy, as well as male and female bodies, are different from each other. The differences between them are not a problem. However, thinking that one is better than the other, or that one is more powerful than the other, or that one is toxic and the other isn’t, does deep damage to our psyches, our lives, our relationships. Yes, that includes relationships between dates, lovers, and spouses, but also relationships between fathers and daughters, mothers and sons, and between countries, cultures, races and religions. It even plays out in our businesses, as much as our corporate HR directors might want us to believe it doesn’t. You simply can’t take the masculine and feminine out of us. We would have a much healthier, and happier, society, with more effective businesses, and much better romantic relationships and family dynamics, if we remembered that masculine and feminine energy complement and support each other. Always. Everywhere. From the boardroom to the bedroom and everywhere in between.

When there is a deep understanding of the masculine and feminine within, we’ll realize that there is a deep communion between the two, that they depend on each other for their fullness and power.

To understand this in more depth, looking at the yin-yang symbol, you’ll see that the white, yang side of the symbol has a full enclosed circle of black, yin energy within it. The black, yin side has a fully enclosed circle of white, yang energy within it. This shows us that the ancients knew that these two energies had to interplay in order to experience wholeness and ultimate fulfillment. In other words, we could say that the masculine cannot be fully embodied, fully expressed, fully empowered without the feminine. More specifically, the potency of the masculine depends wholly on the embodiment of the feminine within and in support of the masculine.

The same is true for the feminine. The feminine cannot expand into her fullest embodied expression, her greatest power, without claiming, owning, and expressing her yang masculine energy as well. It’s important to notice that the yang, masculine energy comes from within her natural yin energy. This is a distinct contrast to how so many authentically feminine women today allow their internal yang energy to dominate and override, their innate femininity, imagining that’s what they need to do to survive and thrive.

This is actually just yet another way we perpetuate the battle of masculine vs feminine. In this case, it’s an internal battle within ourselves rather than an external battle between two or more people. Either way, we will all be served in our hearts, our health, our happiness, and our sexuality if we make peace with these two natural energies.